Under the Octopus Bushes (Argusia argentia) on Coringa South-west Islet a slow crawling Spitting Spider (Scytodidae) surfaced on the litter.  Spitting Spiders have long gangly legs and six eyes arranged in three groups.  Called a Spitting Spider because of their bizarre prey capture method – they spit deadly glue onto their prey in a zig-zag shape to pin it down and paralyse it. Spitting Spiders are the spiders that produce silk in the front part of their body. A rapid contraction of the carapace muscles compresses the large venom gland that produces gluey silk.

Scytodidae are pantropical and some of them are cosmopolitan species. The Australian Scytodid fauna is a not well known – all six described species have only old descriptions and no revision of this family has been done to date. I expect that at least 30 Australian Spitting Spider species exist.

We don’t know yet if this species from Coringa Islet is a cosmopolitan species or a rare new species who lives only on Coringa Islet.

The team has arrived safely at Diamond Islets after a very rough crossing from Hamilton Island to the Coral Sea, leaving many of them quite sea sick.

Most of the scientists and teachers are out and about today with everyone feeling a lot better. Collecting is happening on Diamond Islets in earnest and most of the scientists are happy to be off the boat for a while! Terrestrial animal specialists searching for moths, spiders and geckos will camp out on the Islets tonight and hopefully come back to the boat in the morning with loads of exciting finds.

It’s anchors away! The Odyssey is now steaming its way towards the Coral Sea. With a balmy temperature of 27 degrees it would be a lovely trip if it wasn’t for the average wind speed of 40km/hr and 7ft high waves (that’s high for a surfer), so we hope all our scientists are hanging onto their lunch!

Below is the route the vessels will follow (although this may change a bit due to weather conditions).

UPDATE (Thursday afternoon): We’ve just received a situation report from the Odyssey. The position of the boat at 13:50 is shown on the maps below: click to enlarge them. All is well, but it’s still windy, and the waves are still big, so some of the passengers have been sea-sick. The Odyssey should arrive at the Diamond Islets at about sunrise tomorrow morning. 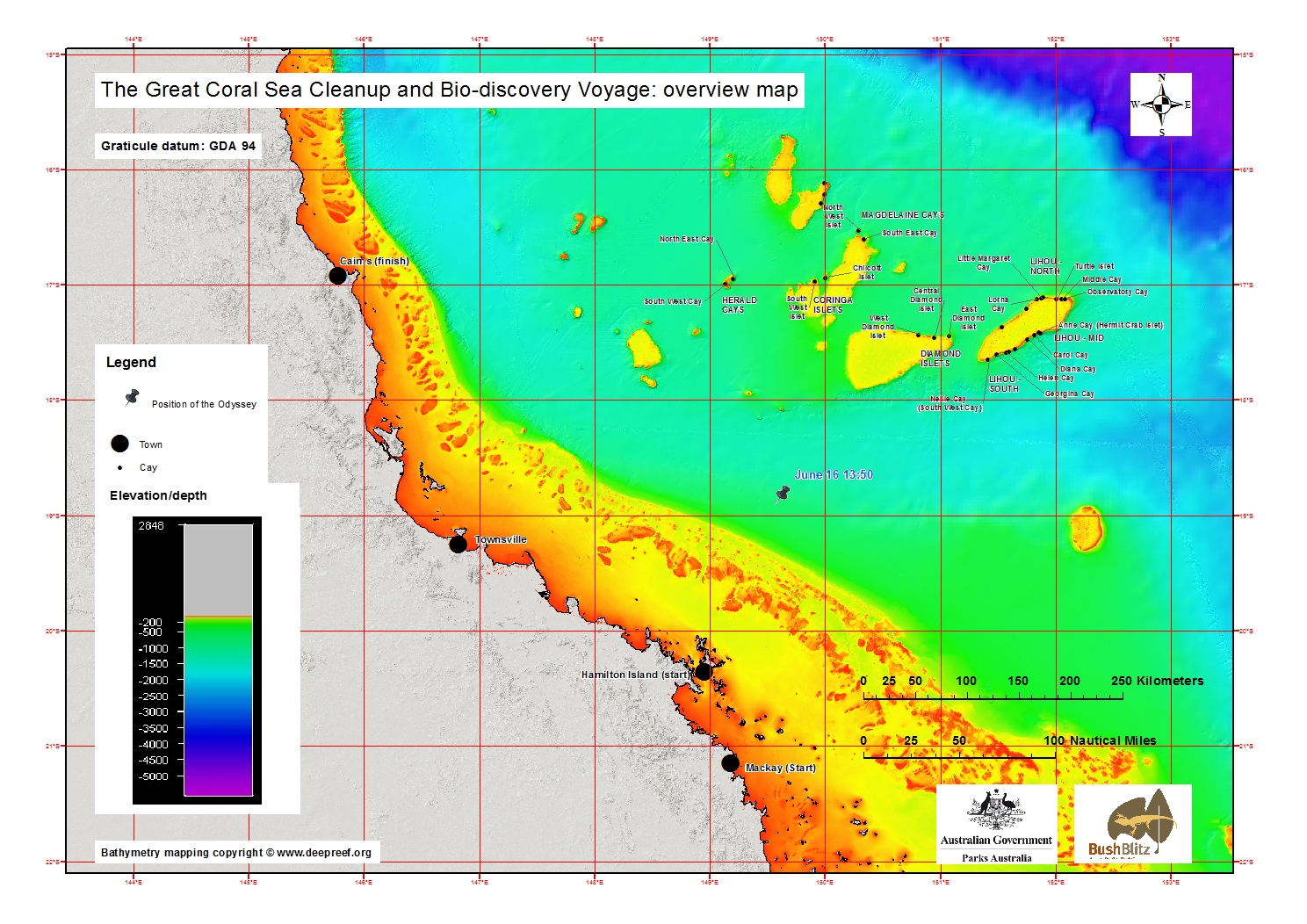 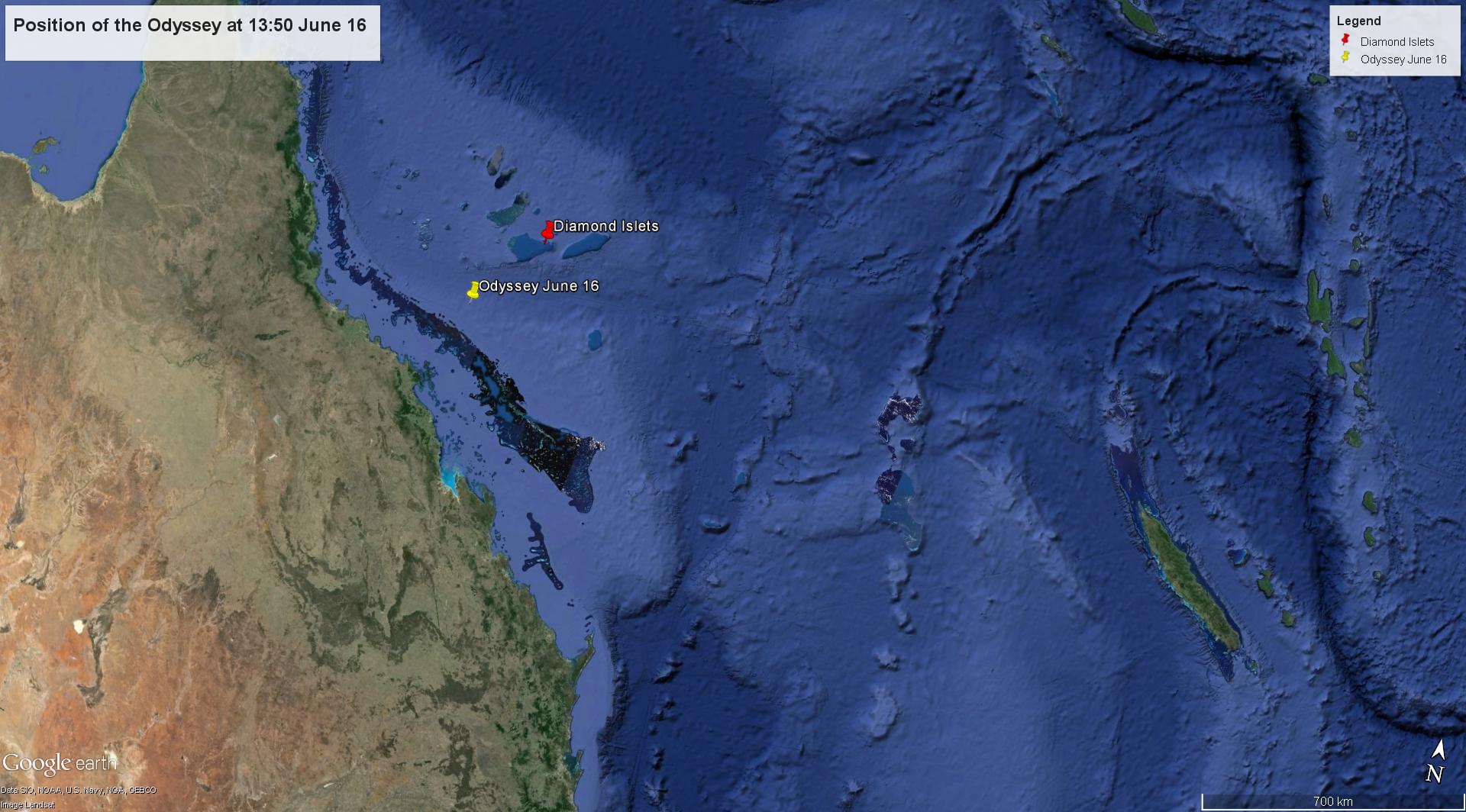 The position of the Odyssey on Thursday June 16 – Google Earth view. Note New Caledonia (the long skinny island on the right hand side). 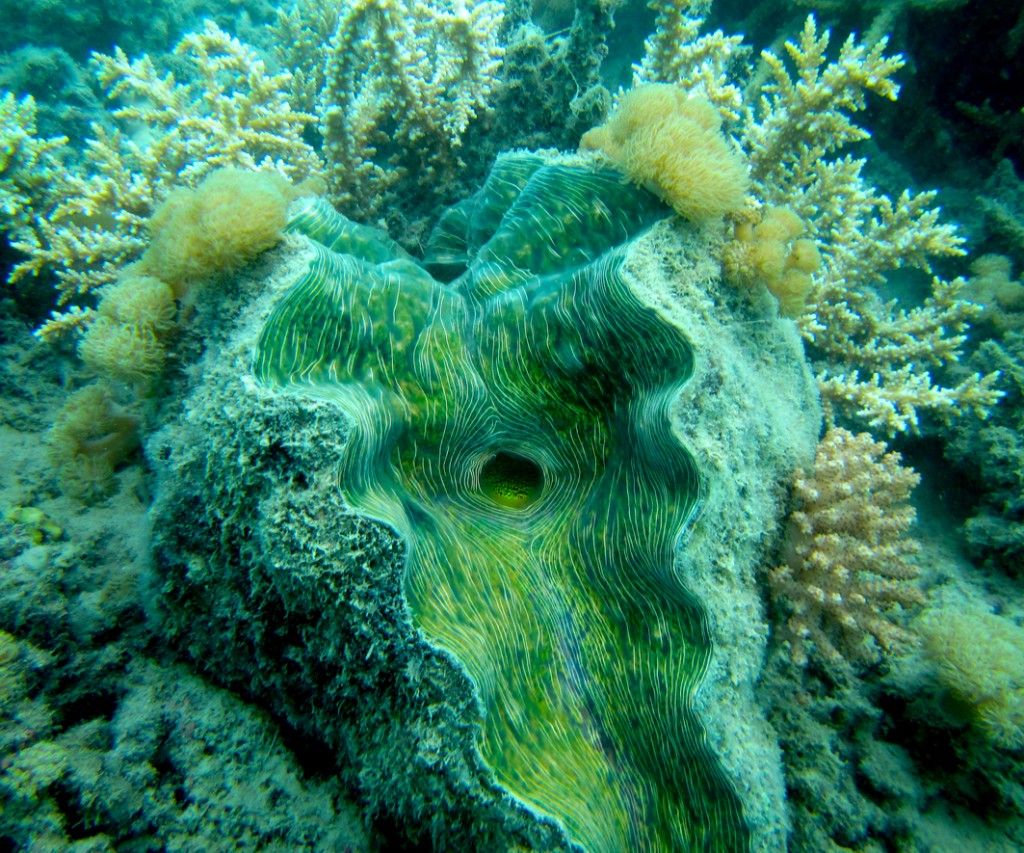 Some of the first amazing images are coming in from the field already. Although the departure of the team has been delayed by a couple of days due to high winds in the Coral Sea making it unsafe to sail, Bush Blitz scientists don’t like to waste a minute of field work time. Collections have already begun on land and sea.

In the image above it’s not the beautiful giant clam scientist Merrick is interested in, it’s the delicate soft coral called Xenia growing along its edges.  Xenia is a genus of photosynthetic soft coral resembling a mushroom, with “arms” coming out from the top that end in many-fingered “hands”.

Take a look at some of the other amazing images and keep checking in to see more!

The Bush Blitz vessel (the Odyssey) is scheduled to leave at 3am Thursday (17th) and should arrive at Diamond Islets in the Coral Sea for a day of collecting on Friday (18th).