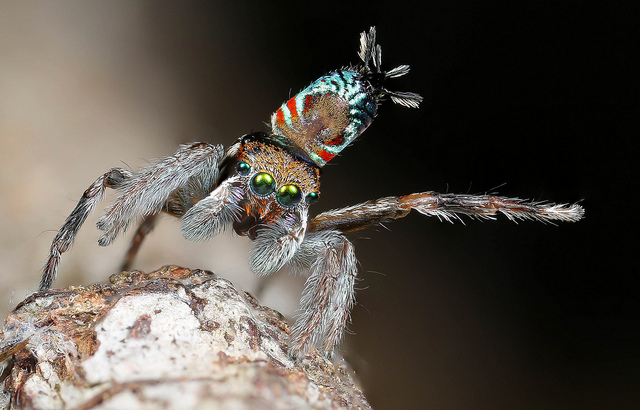 After discovering a tiny dancing peacock spider on a Bush Blitz expedition, Dr Barbara Baehr of the Queensland Museum decided to pay tribute to one of the world’s most iconic classical ballet dancers, Li Cunxin, by naming the new species in his honour.

Li Cunxin is most famous for his autobiography Mao’s Last Dancer, which became a major motion picture in 2009.

Despite having a brilliant blue streak, at less than 4 millimetres long Maratus licunxin is hard to spot, but get close enough and you will be awed by his dance moves and spectacular body.

The tiny but impressive peacock spider was discovered at the Bush Heritage conservation property Carnarvon Station, in Queensland and is one of almost 200 new spider species discovered by Bush Blitz, many of them by Dr Baehr.

Dr Baehr said she was inspired to name the spider in honour of Queensland Ballet Artistic Director Li Cunxin after a visit to the ballet with her daughter.

“As I sat and watched Queensland Ballet’s latest performance, I thought it was stunning, with a fairy-tale like essence that was so marvellous and sweet that it reminded me so much of the dancing of the peacock spiders,” she said.

“It was then I decided I should name the spider after Li Cunxin, famous for his autobiography Mao’s Last Dancer, and his magnificent dancing skills which is much like that of the peacock spider.”

Known for their colourful abdomen, these stunning jumping spiders, which are endemic to Australia, have become an internet sensation over the past five years due to their intricate mating ritual which involves vigorous leg waving.

Queensland Ballet Artistic Director Li Cunxin said he was honoured to have a dancing spider named after him.

“This beautiful dancing Queensland spider is in good company alongside the Queensland Ballet dancers,” he said.

“After watching its elaborate dance, I can see why Dr Baehr was inspired by the graceful dancers in our Company,” he said.

“It is certainly heart-warming to know that our dancers can provide such inspiration to an individual and speaks volumes about the power of this beautiful art form.”

“Queensland Museum scientists have been taking part in the Bush Blitz program since its inception. We are proud to be part of a species discovery program of this calibre, and be able to describe new species such as this beautiful dancing peacock spider,” she said.

The scientific paper describing Maratus licunxin, published in the journal Zootaxa, was co-authored by Robert Whyte and is one of six new species of peacock spiders described by Baehr and Whyte in this paper including Maratus eliasi, Maratus michaelorum, and Maratus ottoi all discovered in Queensland, and Maratus kiwirrkurra and Maratus julianneae from Western Australia.