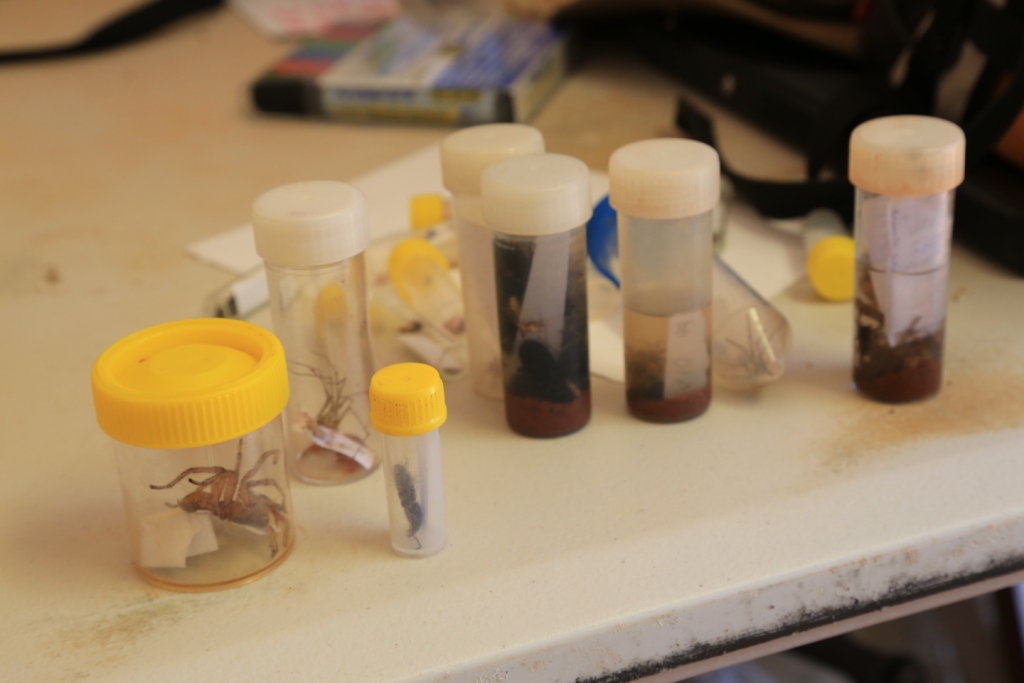 Dr Barbara Baehr’s results have come through from the Kiwirrkurra Bush Blitz.

A memory: Barbara bustles into the little demountable building that was our office at Kiwirrkurra. It is mid-morning, and she has returned from her first day checking the spider pitfall traps. Underneath her broad-brimmed hat her face is ruddy, radiant, glowing with happiness. In her hand she holds a vial.

Inside is something strange, something she’s never seen before, something she can’t place at all. It’s a large spider that she has just retrieved from a pitfall trap on a dune in the Great Sandy Desert: a spider that seems to have some characteristics of the ancient Mygalomorphs, and some characteristics of the more modern Araneomorphs. Whatever it may turn out to be (and she won’t be sure until she takes it back to her lab), it’s an exciting discovery. Rarely have I seen anyone look so happy as Barbara that morning.

Now, months later, on a quiet day in Canberra, her report arrives in my inbox. Here are the fruits of two weeks of intensive field-work in the desert, followed by days and days of painstaking labour peering down a microscope at the Queensland Museum.

Barbara found 61 spider species in all, of which over a third (24) are new to science. You could call this result astonishing, except that it isn’t, really – our biodiversity is so rich, Kiwirrkurra so remote, and our knowledge of spiders so incomplete, that Barbara’s findings are not terribly surprising.

In fact, the actual number of new spider species at Kiwirrkurra must be much higher than 24. Barbara was reluctant to collect Salticids, or jumping-spiders, because the family is simply too rich and too diverse to deal with. (Barbara’s colleague Robert Whyte, a spider expert who was on the expedition primarily as a photographer, did collect a few jumping-spiders – one of which probably represents a new genus.)

Barbara adds that a further 17 of the 61 spider species collected at Kiwirrkurra may also be new species, but she can’t be sure because there are no up-to-date keys for the relevant families. There’s nobody in the world who could say with any certainty whether these collections are new or not. So the 17 ‘orphan’ species from Kiwirrkurra will wait in museum drawers, unstudied and unknown, until the day arrives when a taxonomist – perhaps not yet born – begins working on the relevant groups, names them and drags them from obscurity.

As for the weird specimen that Barbara found in the pitfall traps, it turns out to be a new species of Tube-web spider (family Segestriidae, a poorly-studied group known mostly from specimens taken around 1900). Until now, only females have been found: Barbara’s spider is the first male Tube-web ever collected in Australia.