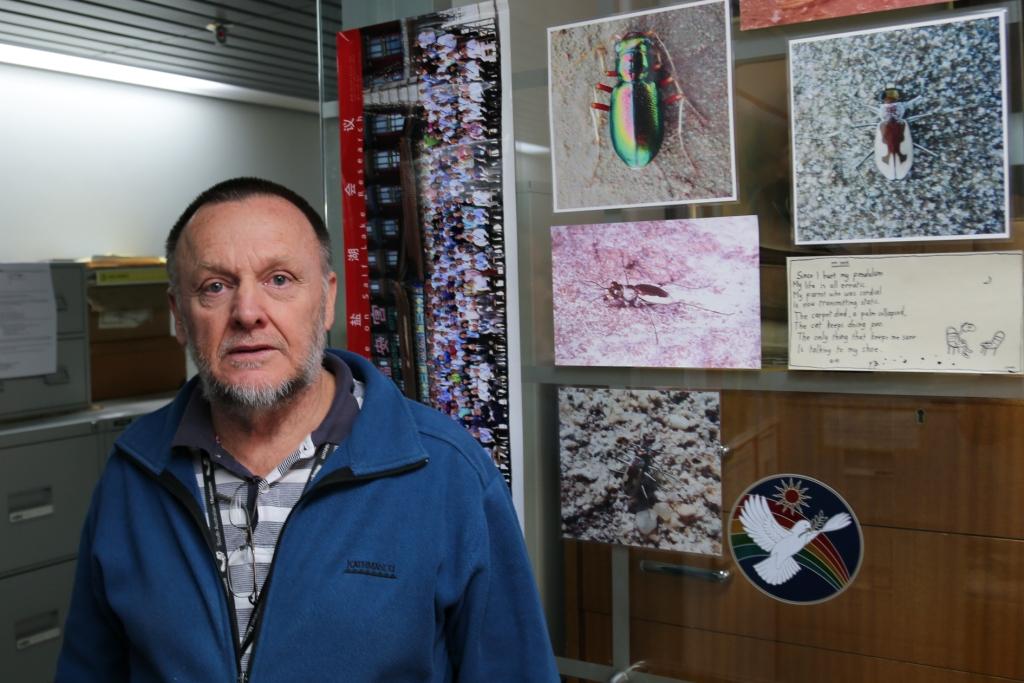 A few weeks back I had the good fortune to visit South Australia to prepare for the upcoming Lake Torrens Bush Blitz. Part of the trip involved a behind-the-scenes tour of the South Australian Museum with Peter Hudson, who’ll be coming on the expedition.

I was intrigued to learn that Peter is hoping to collect invertebrates from the bed of Lake Torrens itself. On the face of it, the lake is extremely hostile to life: it is mostly dry (having completely filled with water only once in recorded history), covered in salt, and apparently devoid of vegetation. Summer temperatures are extreme and the glare is blinding.

You might think that nothing would live on them, but Australian salt lakes host diverse communities of invertebrates – including Tiger Beetles, the fastest running insects on earth.

Many Tiger Beetles have developed adaptations to the extreme conditions found on salt lakes: for example, their extra-long legs allow them to keep cool by elevating their bodies above the furnace-like surface. Some occur only on salt lakes, and have lost the power of flight: their legs take them everywhere they need to go.

As an aside, how do we know that Tiger Beetles are the fastest running insects? Well, scientists have timed the main contenders for the title using high-speed cameras (go to http://entnemdept.ifas.ufl.edu/walker/ufbir/chapters/chapter_39.shtml for details). The winner was the flightless South Australian Tiger Beetle Cicindela (Rivacindela) hudsoni, named after my guide through the South Australian Museum. This beetle has a top speed of around 9 km per hour, which doesn’t sound that impressive until you realise that it’s about 120 body lengths per second – the equivalent of a human running at 812 kilometres per hour.

Another remarkable thing about Tiger Beetles, though not uncommon in the insect world, is their seasonality. If you went to the same salt lake at two different times of year, you might find completely different species of Tiger Beetle. Each species spends most of the year underground, as eggs and/or grubs, and the timing of adult emergence differs between species.

For salt-adapted animals such as flightless Tiger Beetles, a salt lake is an island of habitat in a hostile and uncrossable sea: this leads to the genetic isolation necessary for the evolution of new species. Each of the major Australian salt lakes seems to have its own distinct fauna of Tiger Beetles and other invertebrates. Who knows what Peter will find on Lake Torrens, perhaps the least studied of all South Australian salt lakes?