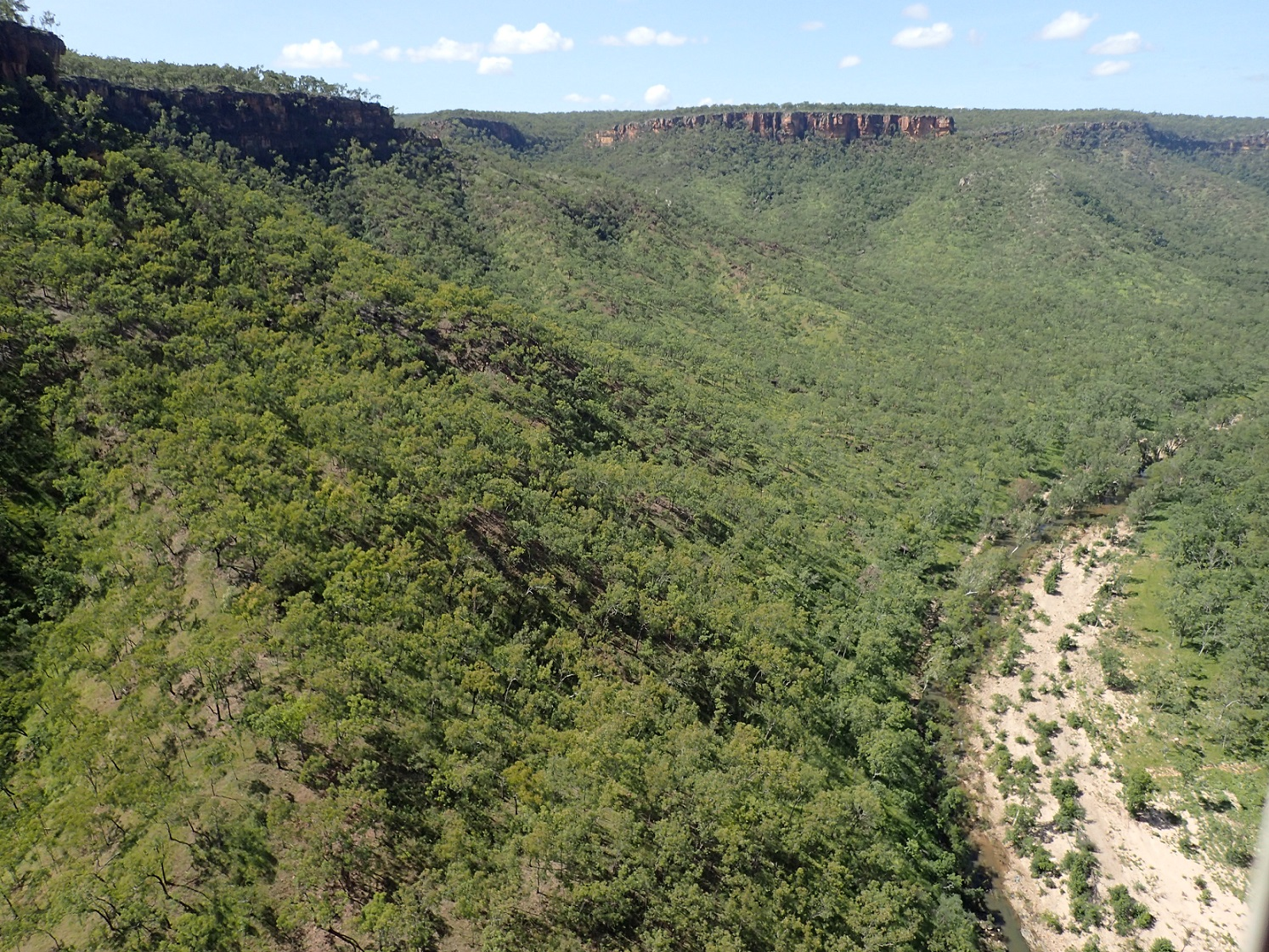 One day, the team from the Quinkan Bush Blitz made plant collections on a traverse from the top of this sandstone plateau through a rainforest gully and emerged onto the flats of the upper Mosman River.

The view from the front of the chopper showed us what we were in for – I’m glad we’d chosen to be dropped off at the top and picked up at the bottom!

The team was quickly into action, collecting plant specimens and taking photographs for a grass-identification field guide. The team fanned out across the sandstone plateau, quickly collecting specimens and returning them to be placed in plant presses for later drying. These will be identified, any new species described, and kept as a reference collection.

Dropping off the edge of the plateau, we climbed down across a spectacular band of conglomerate – full of beautifully ovoid stones worn smooth by water in ancient times.

After waiting for our eyes to adjust to the deep shade of the rainforest gully, we found ourselves in a ravine with cascades and still pools of water. The deep and rich soils and rainforest trees and vines sustaining each other because of the permanent water and steep sheltering cliffs and banks. It was rich pickings for the botanists, froggers, snail-hunters, and entomologists alike.

Combing the leaf litter, I was lucky enough to find three species of native land snails, some specimens as small as two millimetres across. The first empty shells inspired me to keep searching for live snails. Surprisingly, the painstakingly slow work meant that the snails might feel me coming and race away to avoid capture. They were also well hidden in the leaf litter, so I risked not only being outpaced, but also being outwitted by tiny snails.

We emerged onto the grassy flats exhilarated by our day, talking excitedly about the incredible diversity of habitats that we had sampled, thankful of the generosity of the Western Yalangi for allowing us to experience their wonderful country. We alternately rested, gulping water to rehydrate, and leaping up to investigate a plant, bird or insect we had spied.

As the sun began to set in the valley, we were treated with a view of glowing sandstone cliffs that made us feel like staying in that moment forever. But, the alarm call of the blue-faced honeyeaters alerted us to the imminent arrival of our retrieval helicopter.