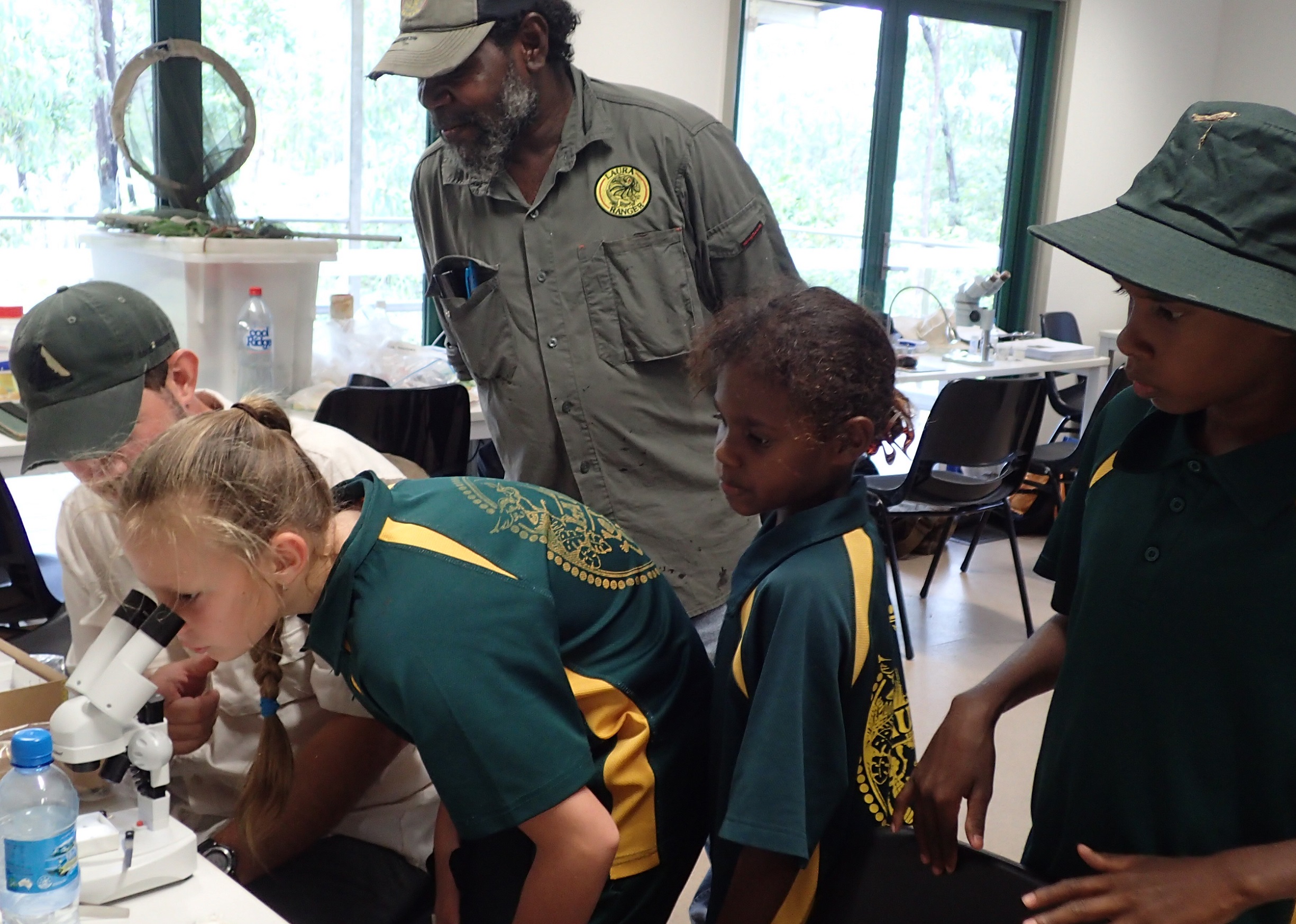 See how our scientists go when they are asked to go – “back to school”.

Nine Laura State School students and three teaching staff shared their wonder for nature, hunger for learning and contagious enthusiasm with the Bush Blitz scientists during field collecting and a visit to the lab.

After each of the scientists explained what they did, hands shot up with questions on topics ranging from venom toxicity to why anyone would be interested in snails. After some healthy hesitation, almost all the students took the opportunity to experience the feel of a large spider crawling over their hand and arm – I suspect the spider needed a rest after the repeated turns.

Unbeknownst to the students, traps had been laid on the margins of the school oval – yellow pans (a yellow plastic bowl with a water-detergent mix in it – invertebrates think it is a flower and land in the water) and a Malaise trap (a maze of netting that invertebrates can’t figure out how to escape from).

Before going out to check the yellow pans and the Malaise, each student made their own pooter to collect the smaller invertebrates. The pooter allowed the students to safely suck up insects into a jar to take back to the lab to show the scientists what was to be found on school grounds. (If you’d like to make your own pooter, instructions can be found here: http://www.discoverwildlife.com/british-wildlife/your-garden/how-make-pooter)

Assisted by the Laura Rangers and Western Yalangi, the students soon found dozens of species of invertebrates in the traps, clinging to the leaves of shrubs, secreted under bark, burying dung, or simply flying or crawling around. Sucking on their pooters, everyone had soon vacuumed up a selection of specimens to take to the lab.

After a game of ‘guess-whats-in-the-bag’ the scream was deafening as a writhing non-venomous snake was extracted from a calico bag. Once composure had returned, everyone had a chance to get up close to the reptiles and frogs found so far, learn about the techniques for high-resolution photos using cooled mock habitats to slow the animals down, and talk to the scientists about the lifecycles, behaviours, habitats and food of true bugs, bees, spiders, invertebrates – and seeing them close up under the microscopes.

When opened, tightly bound stacks of cardboard and newspaper revealed an immense variety of flower and plant specimens, from the tiniest herb from a cliff edge to ferns that cling to the trunks of rainforest trees.

Holding a cicada, our fingers were buzzed with the vibrations of their calls – but we all managed to resist the natural reaction of wanting to let it go. Underneath, we could see the structures that rapidly move to make their characteristic calls.

By the end of the excursion all the scientists felt inspired by the students’ enthusiasm and joyous wonder at the diversity of nature – the students had a glimpse into a scientist’s day, and learned a little more about what is around them.

At the end, one student remarked: “I want to go to school every day, so I can learn and then do this”.