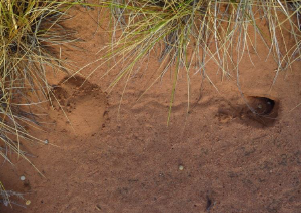 The recent discovery and filming of a western marsupial mole (Notoryctes caurinus) by Indigenous rangers near Kiwirrkurra has garnered a lot of media attention.

The marsupial mole, which is restricted to the deserts of central and western Australia, is almost never seen, and even less often captured on camera. It spends most of its time underground, and many aspects of its life history, ecology and evolutionary relationships remain mysterious.

The rangers who found the marsupial mole also worked with Bush Blitz scientists on our expedition to Kiwirrkurra last year. Our scientists weren’t lucky enough to set eyes on a mole – that would be a once-in-a-lifetime event – but with the help of the rangers, they did record evidence of its presence.

The photo above was taken by one of our survey teams during the Bush Blitz. To the untrained eye, it’s just a squiggle in the sand. But to an expert indigenous tracker, it shows the markings made by a Kakarratul (the Pintupi name for the mole) as it emerged from the ground, crawled along the surface for a short distance, then burrowed back in.

Both the photo of the tracks and the recent film footage were taken near Wilkinkara, or Lake Mackay, a vast salt lake in the north-east of the Kiwirrkurra IPA: it seems this area is a hotspot for marsupial moles.

You can see photos of the mole and read more about the recent discovery on the Kiwirrkurra (Tjamu Tjamu) Facebook page here.