This competition has finished. Thank you to everyone who entered!

We asked Australians to help us name a new species of spider discovered by Bush Blitz scientists on an expedition to the Quinkan Country of Queensland’s Cape York Peninsula in 2017. Discovered on a hilltop just outside the town of Laura, he was instantly recognised as a new species of jumping spider. Thanks to the thousands of Australians who entered our Bush Blitz spider naming competition. Due to the overwhelmingly large number of entries the competition attracted, the judging panel has taken a bit longer than expected to sort through all the wonderful names. The top two names will be selected in the coming weeks and reposted on the Bush Blitz Instagram account (and here) for a public vote. 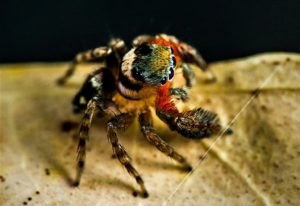 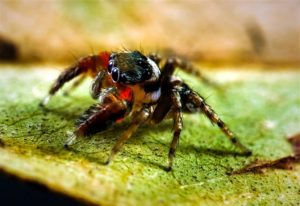 What is a scientific name?

A scientific species name has two parts. The genus part and the species part. For example Homo sapiens (modern humans), the name Homo refers to the genus, and sapiens refers to the species. Other species of the genus Homo have existed, like Homo neanderthalensis (the Neanderthal). So when describing a new species the genus is usually already known and the new species name is chosen by the scientist that discovered it. Names often refer to some physical feature of the new species, like colour, or a geographic location. But a name can be anything the scientists chooses.

A species can be named after famous people, or someone connected to the scientist or the discovery. Recently the winning entrant for a naming competition of a new species of Nudibranch, was Mordilla fifo, Mordilla being the genus name and fifo meaning fly-in-fly-out. The entrant explained that the nudibranch should be named after the fly-in-fly-out mine workers of north-west WA, where the creature was discovered.

How to name one of the cutest spiders in the world

We already know the genus for this jumping spider (the first part of its name). This is your opportunity to choose the second part of the scientific name.

The genus for our new jumping spider species is Jotus, so we’re looking for Jotus X.

When new species are published they require an etymology, this is a description of the name and why it was chosen. Names also need to follow international rules, the name needs to be relatively short, sound good, be memorable, and should not cause offense.

Find your inspiration in this spider’s physical features, its behaviour, where it lives, what/who it looks like! There’s more information below to help you out. Get creative! If you win, your entry will be made grammatically correct so that it fits with naming conventions and can be officially published.

The reason you give for your name will be taken into account by the judges and will most likely be used in the scientific paper when it’s published.

Why describing new species is important

To protect or study a species, you need to first give it a name. A scientific name is a detailed description of an organism, and explains why and how this species is different from all others. The name also gives it a place in its family tree, showing how the organism has evolved. This allows anybody reading the description, over decades or even centuries, to recognise this exact same species. With this information they can then build up more information about its ecology, distribution, behaviour, or even medicinal properties. Naming is the essence of biology. Today, for a species, no name means no future.

The genus Jotus is part of the jumping spider family (Salticidae). There are only nine species in the genus, with the first one described in 1881 and the most recent just last year. Jumping spiders are found all over the world, from tropical forests to deserts and from intertidal zones to the slopes of Mount Everest. They are tiny, with the smallest being as small as 1 mm and the largest a whopping 25 mm, so you would be hard pressed to see them if you aren’t looking. But don’t let their size fool you, they are ferocious active hunters….if you are a fly. In true Spiderman fashion, they tether a line and leap at their prey from a great distance (for something only 10 mm long, that is). But what makes jumping spiders most endearing is their Michael Jackson attitude to winning a girl, through song and dance. Using everything from #NaeNae to the booty twerk, male jumping spiders go all out to impress the ladies. There is however evidence that they may not know if the female is of the same species, and if they try and impress the wrong girl, she is likely to eat him alive…sound familiar guys? 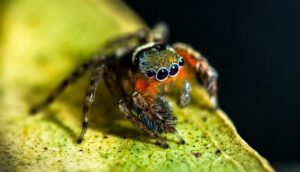 This little guy is only one of 60 new species of spider discovered on the Quinkan expedition by a team of spider experts.The discovery of our new jumping spider was a joint effort – he was collected by PhD student Jim Mclean from Macquarie University while he was looking for ant-mimicking spiders. He was confirmed as a new species by expert Dr Barbara Baehr of the Queensland Museum who will officially describe the species in a scientific publication in 2018. The beautiful photos were taken by arachnologist and photographer Robert Whyte.

Though tiny (4mm long), our little Jotus is quite spectacular. If you look closely at the photo you will notice the orange “beard” under his chin and the purple hairs on the top of his legs. He’s also rocking some black and white stripes. Like other jumping spiders he has four pairs of eyes: two large principal eyes on the front of their head to capture detail and two smaller lateral eyes next to these that detect motion. Then (they’re hard to see) four small eyes on top of the carapace.